Alicia de Larrocha de la Calle was born on May 23rd, 1923, in the fourth floor of 263-bis Córcega Street, on the corner of Enrique Granados Street, in Barcelona. She was the third of four childrens (Teresa, Berta, Alicia and Ramon)  born of Eduardo de Larrocha and Teresa de la Calle.

Her mother and her aunt, Carolina de la Calle, were disciples of Enrique Granados, therefore Alicia grew up in a very musical family setting. In addition,  she received, since 1927,  the wise teachings of  Frank Marshall, also a disciple of Granados himself,  who continued with the piano school, and who became her sole maestro. Although she possessed extraordinary abilities, both her family and teacher did not wish the young Alicia to suffer exploitation, as did many “prodigious” children in those days. Her public appearances were limited to two or three yearly, always under the control and discretion of her teacher.

On May 14th, 1929, Alicia was presented for the first time to the public in the Marshall Academy, interpreting the works of Bach, Mozart and Granados. The composer and critic, Joaquín Turina, wrote the introduction of the program, describing the surprise and admiration that he felt when he heard the child play with such an exceptional musical talent.

On December 12th, 1929, Alicia gave a small recital during Barcelona's International Exposition, at the Palace of Missions. Her debut with an orchestra took place on October 28th, 1934, at the Barcelona's Municipal Palace of Fine Arts  when she was 11 years old, whith Maestro Joan Lamote de Grignon and the Municipal Band of Barcelona. She performed the Mozart Concert in D major “Coronation”, concert that she repeated in Madrid on April 1st, 1936, with the Symphonic Orchestra conducted by Enrique Fernández Arbós.

During the Spanish Civil War (1936-1939), Alicia’s emerging career took on a forced interruption. She took advantage of that period to study new pieces for her repertoire and compose some pieces of youth. 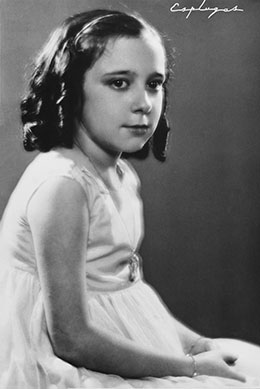