During 1982, De Larrocha was forced to cancel some concerts because her husband fell seriously ill. He died on August 9th of that same year. She lost her major source of support. It was a very hard blow for her. However, surrounded by her children and friends, onemonth later she found enough strength to continue with concert performances, returning to the stage, and starting her most prolific period of concerts.
Alicia de Larrocha had a very intense piano career, accomplishing nearly 4000 concerts around the world, mostly in Europe, Japan and most of all, in the USA. The period in which most concerts were performed was from the end of the 1960’s untill the 1990’s, however without doubt it was during the decades of the 1980’s and 1990’s when her agenda was the most full, giving more than 100 concerts a year during some of those years.

In 2001, year of the Centenary of the Granados Academy fundation, (which since 1920 changed its name to Marshall Academy), Alicia de Larrocha directed and revised a newer necessary edition of the Complete piano works of Enrique Granados, published by Editorial Boileau of Barcelona, along with comments and analysis by Douglas Riba.

Even though during 2002 de Larrocha began to announce her retirement, in 2003 was when she definitely said goodbye to performing, by giving her last concerts in Barcelona, various Japanese cities (coinciding with her 80th birthday), New York, Chicago, Montreux (Switzerland), and the last and final concert was in Jerez (Andalucía – Spain) on November 29th, 2003.

During 2004, de Larrocha continued to give master classes in the USA, France, Italy and Spain. Precisely on the last days of September and the beginning of October, she gave a course on “Iberia” of Albeniz in the Marshall Academy of Barcelona. The classes were to run for one week, however two days before finalizing the course (1 October), Alicia had her femur fractured and had to have surgery. After that unfortunate day, her life suffered a complete change. During some time (2 or 3 years), she was able to supervise in her home, students of Pianistic Perfection and Specialization in Spanish Music, until her health prevented her from continuing.

Throughout her career as a pianist, she was presented with many awards and honors. 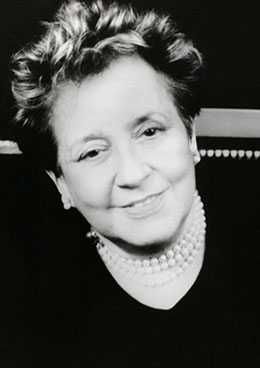